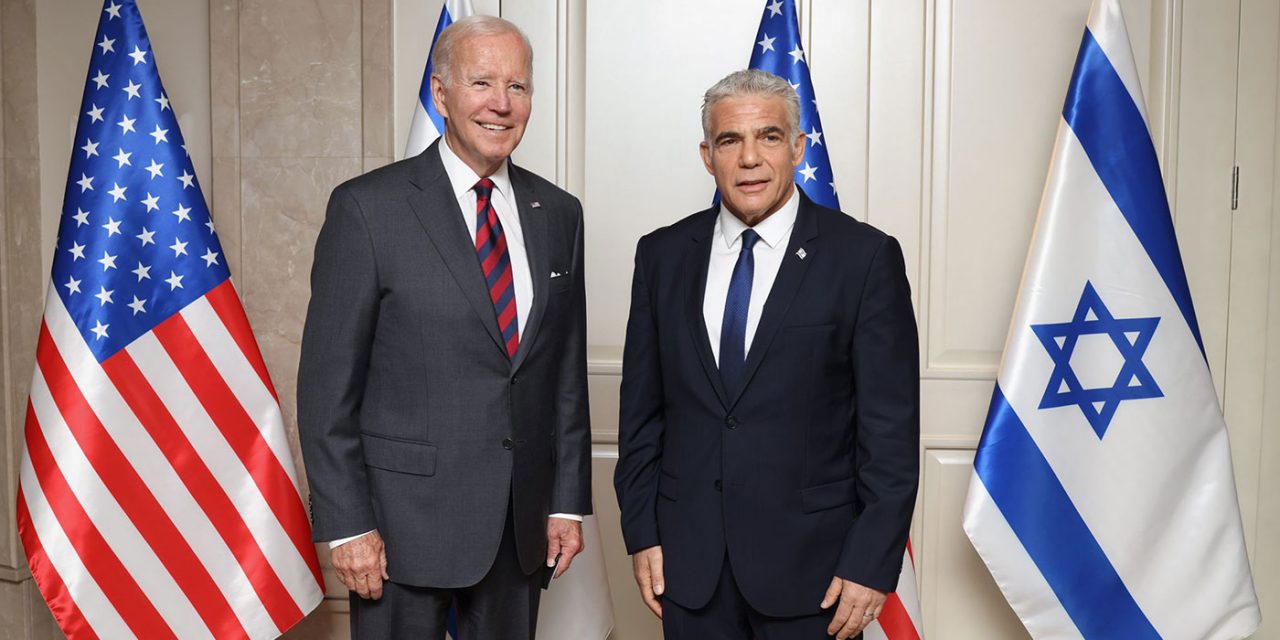 Israel’s Prime Minister Yair Lapid hosted US President Joe Biden in Jerusalem this week where the Israeli leader said words and diplomacy may not stop Iran from achieving nuclear weapons, but force will.

The pair signed the Jerusalem declaration during their meeting highlighting the joint desire to stop Iran from obtaining nuclear weapons. However, it seems the leaders are at odds with how Israel and the US want to deal with the situation. Yair Lapid is clear that diplomacy is not the answer, but President Biden continues to believe it is.

“The only thing that will stop Iran is knowing that if they continue to develop their nuclear program the free world will use force. The only way to stop them is to put a credible military threat on the table,” said Lapid.

“It should not be a bluff, but the real thing,” Lapid continues. “The Iranian regime must know that if they continue to deceive the world, they will pay a heavy price.”

“The fact that I am standing here today did not happen by itself,” said Lapid. “We learned the lesson, Mr. President. At all times, Israel must be strong, free and safe, with a powerful army that can defend our citizens.”

Referencing the biblical Joshua and Martin Luther King, Lapid says, “The principle is the same: If you want your independence, your hands must defend you, and your legs must pray for you. You must march fearlessly towards the river.”

Lapid also asked Biden to send a message to the leaders of Saudi Arabia, Qatar, Kuwait, Oman and Iraq: “Our hand is outstretched for peace. We are ready to share our technology and experience, ready for our people to meet and learn about one another, ready for our scientists to collaborate and our businesses to cooperate.”

“We send with you, to all the nations of the region, including of course the Palestinians, a message of peace.”

The prime minister pointed at “Russia’s unjustified invasion of Ukraine,” terrorism, and the Iranian nuclear threat as reminders that “in order to protect freedom, sometimes force must be used.”

Lapid also drew a parallel between the 9/11 terror attacks and Hamas rocket fire on Israeli communities, painting them as attacks on democracy that instill fear in terrorists and their supporters.

“What scares them the most is that their citizens, their people, can see us. They can see our quality of life. The dynamism and creativity of our economy. The rights of women and the LGBTQ community. Freedom of religion and freedom of speech.”

“It’s what makes the Iranian regime develop its nuclear program, Hezbollah aim its missiles at us and terrorist organizations worldwide send suicide bombers,” he continued. “They want to destroy the only Jewish state in the world. We will never let that happen.”

Lapid finished by thanking Biden for America’s friendship and commitment to Israel, calling it “one of the cornerstones of Israel’s national security.” He then thanks Biden for his friendship to the Jewish state.

Speaking after Lapid, Biden said, “I continue to believe that diplomacy is the best way to achieve this outcome.” He added that there is “an ironclad commitment from the United States of America to Israel’s security.”

Former Prime Minister Benjamin Netanayhu also met with President Biden and repeated Lapid’s assertion that a military plan needed to be on the table.

“I told him that with no credible military option, Iran won’t be stopped. If Iran isn’t deterred, that military option has to be used,” Netanyahu said.

Netanyahu noted Biden’s role in securing supplementary funding for the Iron Dome missile defense system and said Biden “supported us in many areas over the years.”

“We’ve been friends for 40 years,” he said, “but to ensure the next 40 years, we must deal with the Iranian threat.”