An Ohio restaurant owned by an Arab-Israeli Christian has reopened days after four patrons were injured in a machete attack.

The Nazareth Restaurant and Deli in Columbus reopened Monday, with its display of an Arabic greeting and Israeli flag still prominently positioned at the entrance to the restaurant.

Hany Baransi has been serving authentic hummus and falafel in his central Ohio eatery for 27 years, proudly giving diners a taste of his Israeli Christian Arab heritage between bites of rich Mediterranean fare.

A sign bearing an Arabic greeting—“Ahlan Wa Sahalan”— hangs prominently near the glass doors of his Nazareth Restaurant & Deli in Columbus, through which passersby can also spot an Israeli flag. Baransi says he has always been outspoken about his Israeli identity, and so when his restaurant was attacked on Thursday evening by a machete-wielding man, he believed it was no coincidence.

The assailant, identified by police as 30-year-old Mohamed Barry, “came in and asked where I was from,” Baransi told The Tower. While Baransi was at home nursing a headache at the time, one of his employees– a young waitress– told Barry that the owner is from Israel. The man left after he determined that Baransi wasn’t at the restaurant, only to return around 30 minutes later with a machete and start hacking people.

“He came to each table and just started hitting them,” Karen Bass, who was in the restaurant at the time, told WBNS. “There were tables and chairs overturned, there was a man on the floor bleeding, there was blood on the floor.”

According to authorities, Nazareth’s employees and patrons fought back and threw chairs at Barry, who fled the eatery after injuring four diners. He led cops on a five-mile chase before his vehicle spun off the road and, armed with his machete and another knife, he lunged at the officers.

“He yelled ‘Allahu Akbar’ and then he attacked them with the machete and that’s when they shot him and killed him,” Baransi said.

No cops were wounded during the attack, and the four victims who were injured inside the restaurant are expected to recover. 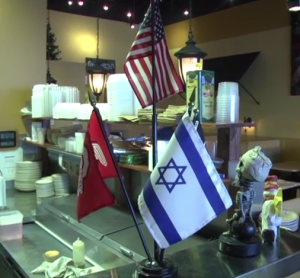 “I am a very outspoken Israeli, and I have an Israeli flag in my restaurant,” added Baransi, who moved to the United States from Haifa in 1983 and said he tries to visit Israel as often as he can. “When people [from the Arab community] ask me where I am from, I tell them I am Israeli, I am an Israeli Christian Arab, it’s not like I am Palestinian, and then they start arguing and fighting with me.”

Baransi noted that the FBI, which has since joined the investigation and is probing whether the assault was an instance of homegrown extremism, has yet to share any conclusions. He mentioned that he is hoping to hear from them by Monday. For now, he is focusing on helping his staff cope with the traumatic experience they underwent.

“You know, we are Israelis, used to this in our lives, people attacking us and wanting to kill us,” he observed. “But Americans — I have young ladies, 19, 20-years-old, they probably never heard people yelling and screaming. It was a huge experience for them. And some of them are very devastated. All of us communicate on a daily basis, and some of us, a couple of people, are still having a really hard time.”

He said that he is only willing to reopen his restaurant once his staff assures him that they are ready. “Even though I am hurting financially badly, if this time is needed for the well-being of my employees, I am okay with that,” he stressed. “God will provide for us.”

When asked whether he would consider removing the Israeli flag seen from his restaurant’s entryway as a precaution, Baransi swiftly rejected the idea.

Baransi said he spends 12 to 14 hours each day working in his restaurant and has never experienced such an incident before, but indicated that as an Israeli Christian Arab, he feels “very discriminated against in the way the Arabs look at me.” Despite this, he emphasized that these were barriers that could be overcome. His best friend in Haifa, who graduated high school at his side, is Muslim. And he has made Arab Muslim friends in America, too.

“I have a Muslim friend who is from Jordan. He is my best friend. We talk politics, we talk religion, and we are completely different people. We can yell at each other and fight,” he chuckled. “But I know I love him, I know he loves me, we would die for each other.”

Still, he suggested that sometimes, he feels like he doesn’t quite fit in with anybody. “Even with the Israelis, I still feel different because of the Jewish community. But then even with the Israeli Arabs. It’s just a weird kind of feeling.”

“But I am very happy in my life,” he quickly added. “I feel okay. I love my country Israel, and I will defend it until the day I die.”