Organisers of a Holocaust remembrance ceremony in Germany reportedly attempted to “remove with physical violence” a Jewish man for marching with the Israeli flag while allowing anti-Israel activists and those sporting the Palestinian scarf, or keffiyeh, to participate.

Rolf Woltersdorf joined Thursday’s “Walk In Remembrance” in the northern German city of Oldenburg carrying an Israeli flag “as a sign of solidarity with Israel – the state of survivors of the Holocaust,” he told the Jerusalem Post.

“No sooner had I rolled out the flag, a teacher came to me and demanded that I roll back the flag,” Woltersdorf, who is a member of the German-Israel Friendship Society (DIG) in the city, said. He added that a fellow member of the DIG also told him to put the flag away.

Woltersdorf said one organizer of the march was so incensed by the flag’s presence he “wanted to remove me with physical violence.” 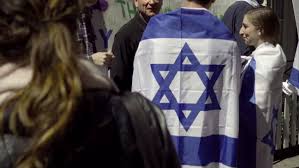 The Holocaust memorial march occurs every year to mark the deportation of Oldenburg Jews to concentration camps and the destruction of the town’s synagogue in 1938. Students from the local school contribute to the event and, according to the Post, many of them were wearing the keffiyeh, a checkered scarf that has become a symbol of Palestinian nationalism.

Rabid anti-Israel activist and teacher Christoph Glanz, who accused Israel of genocide and said the Israeli government was “a racist freak show,” also took part in the march.

Glanz accused Israel of “crimes against humanity” and “ethnic cleansing.” He also said Israel is engaged in genocidal activities and “Israel’s government is a racist freak show.”

In September, Glanz published a call in the teachers’ union magazine for a blanket boycott of Israel in the first incident of its kind since the Holocaust, plunging Oldenburg into the center of an anti-Semitism firestorm.

Woltersdorf slammed Glanz’s participation in the commemoration event because of his efforts to “defame and demonize Israel as an ‘apartheid state,’ which he wants to abolish, and this is apparently acceptable,” he told the Post.

Another DIG member, Cordula Behrens, also draped herself in an Israeli flag. A teacher confronted Behrens, saying the flag has nothing to do with the memory of dead Jews, the report said.

According to Efraim Zuroff, the Simon Wiesenthal Center’s chief Nazi-hunter and head of its Jerusalem office, the Oldenburg incident “is part of a new trend to use the Holocaust to besmirch and delegitimize Israel.”

“The only good Jew is a dead Jew for these people. It is a very dangerous thing because they are ostensibly trying to remember the Holocaust but these are distorted lessons of the Holocaust. It is the ultimate insult,” Zuroff told the Post.