Tim Farron is facing calls to expel Jenny Tonge from the Lib Dems after she sought to offer a “reason” for rising anti-Semitism against British Jews – Israel.

The peer, who resigned the Lib Dem whip in 2012 but remains a member of the party, made her comments in response to the findings of the home affairs select committee’s report on the scourge.

In a letter to the Guardian, which has yet to be printed, she welcomed the report but insisted “it would have been more useful if it had investigated the causes of antisemitism too. It is difficult to believe that a 75 percent increase in antisemitism it reports have been committed by people who simply hate Jewish people for no reason.

“It is surely the case these incidents are reflecting the disgust amongst the general public of the way the government of Israel treats Palestinians and manipulates the USA and ourselves to take no action against the country’s blatant disregard of international law and the Geneva Conventions.”

“Added to this is Israel’s adoption of the official title of ‘Jewish state of Israel’. This conflates Israel with the Jewish people here, whether or not they support the Zionist state and many do not. I look forward to the sequel to this report. Be tough on the causes of antisemitism as well as the loathsome sentiment itself.” 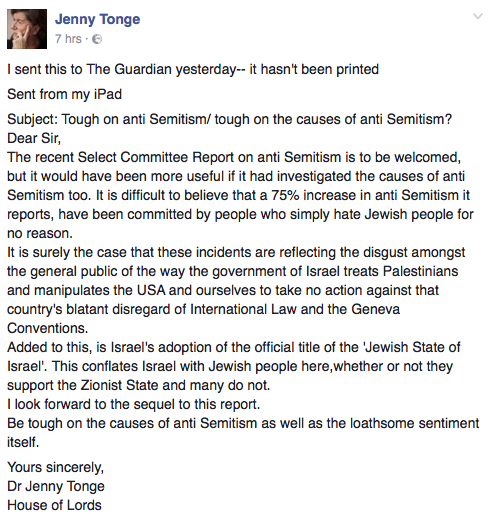 Tonge is a serial offender having once said she might consider becoming a suicide bomber if forced to live like the Palestinians and later resigned the party whip after saying Israel would not exist forever in present form.

The party failed to take action this year after Jewish News exposed that she had shared a post referring to “Jewish power” on social media.

Following her latest comments,  a party spokesperson said: “Jenny Tonge does not take the party whip in the House of Lords and does not speak for the Liberal Democrats on Middle East issues.

“If a complaint is made, we will investigate it quickly and thoroughly.”