An UNWRA school removed anti-Semitic cartoons from its Facebook page, more than five months after they were first posted.

The Rameh UNWRA school, located in the Jaramaneh Camp in Syria, had posted images which showed people being attacked by cars. One of the cartoons featured a caricature of an orthodox Jew, and another had a caption which explicitly referred to a “car intifada”.

The pictures were first brought to public attention by UN Watch, an organization devoted to raising awareness of what it perceives to be injustices against Israel which originate in the UN and its affiliate organizations.

“We respectfully demand that you take action immediately to remove the images, apply accountability to the highest levels of UNRWA, and apologize for inciting to racism,” UN Watch executive director Hillel Neuer demanded of the organization. 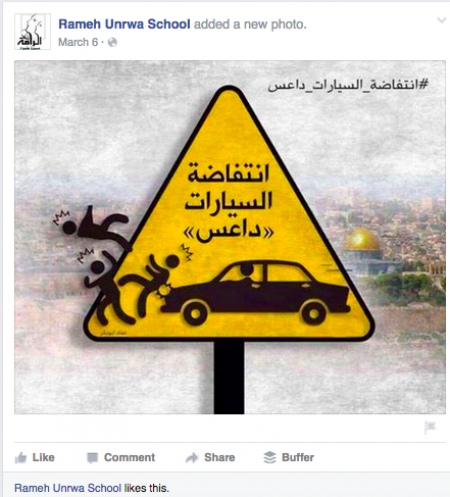 Another of UNRWA’s images shows cars attacking people, with the caption that translates to “Cars intifada Daes,” using the Ara­bic term “Daes” (Run-over), a play on the Ara­bic word for “Daesh” (ISIS)

Read the full article at i24 News