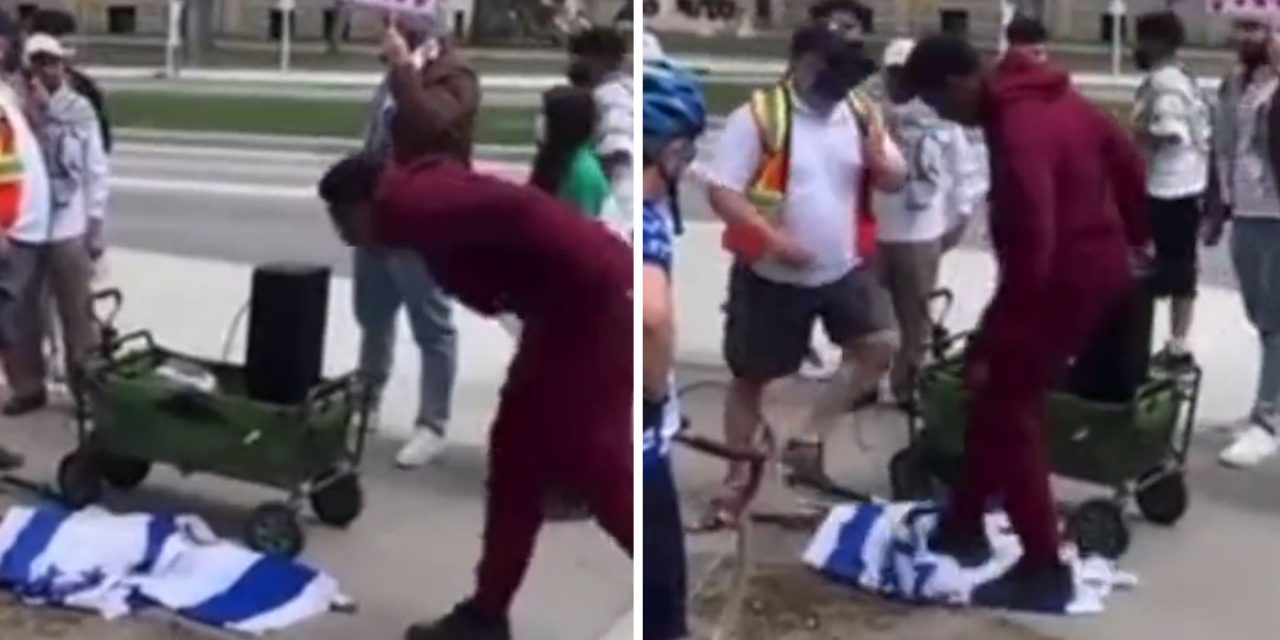 A video has emerged of a Palestinian activist desecrating an Israeli flag as an anti-Israel mob confronts pro-Israel demonstrators.

The video was shared by Hananya Naftali on Twitter who wrote, “Pro-Palestinian activists spit and step on Israeli flag during a demonstration.”

Adding, “Have you ever wondered how come they only preach hate and never preach peace?”

Pro-Palestinian activists spit and step on Israeli flag during a demonstration.

Have you ever wondered how come they only preach hate and never preach peace?

All they say is “Free Palestine”. Well, Palestine has been freed already, and its original name restored to Israel! pic.twitter.com/rRa6d53fB8

The video footage shows a group of pro-Israel activists standing on a street corner as pro-Palestinian activists approach them. One of the anti-Israel mob then walks up to the Israeli flags, spits on them and wipes his feet on them. This action, which not only desecrated a country’s flag but also damaged an individual’s personal property, sparked a reaction from one of the pro-Israel activists who confronted the man and pushed him off the flag.

This then resulted in an exchange of words where a number of anti-Israel haters taunted the pro-Israel man, swiped his hat off his head and caused him to lose his sunglasses and other belongings when he was shoved. The clip ends when a police officer steps in between the men to end the confrontation.

At CUFI, we have often witnessed the hatred and intimidation that comes from pro-Palestinian activists, which sadly sometimes includes violence. We must continue to stand up for Israel and pray for the pro-Israel activists who are risking their own safety to stand up for the truth. Love and truth will always conquer hatred and lies.