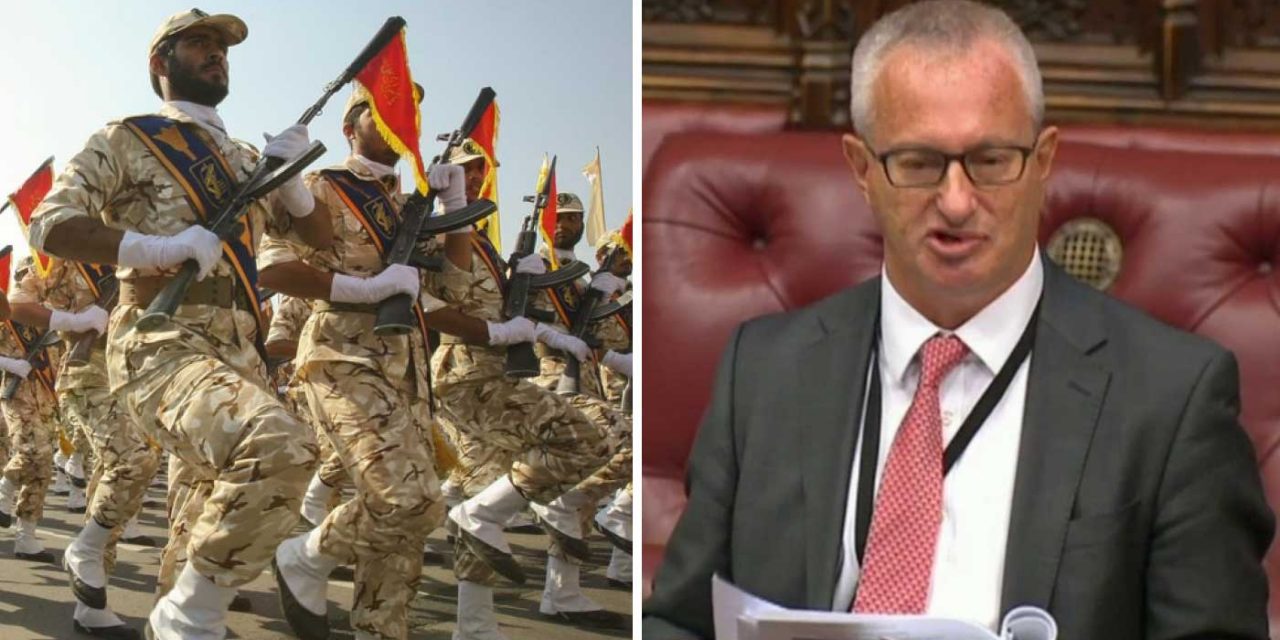 A number of Lords have called upon the British government to outlaw Iran’s military outfit the Islamic Revolutionary Guard Corps (IRGC) in the same manner that Hezbollah and Hamas have been outlawed. They also questioned the validity of the Iran nuclear deal.

Lord Polak, who is the honorary president of the Conservative Friends of Israel, quoted Roger Boye’s article in the Times that day, saying, “Iran is led by a toxic alliance of aggrieved religious leaders and a corrupt revolutionary guard with a brief to sow discord.”

Polak then asked, “Her Majesty’s Government rightly proscribed Hezbollah. Hezbollah was a creation of the IRGC so I can I ask my noble friend the minister to press his colleagues at the Home Office to fully proscribe the Iranian Revolutionary Guard Corps?”

Lord Sharpe, who was responding on behalf of Boris Johnson’s government, responded: “The government regularly assesses the impact of the IRGC’s destabilising activity throughout the region, including its political, financial and military support to several militant and proscribed groups, including Hezbollah in Lebanon and Syria, militias in Iraq and the Houthis in Yemen.

“Such activity compromises the region’s security, its ability to prosper, and escalates high tensions. It is for this reason that we have over 200 UK sanctions listings in place against Iran, including IRGC in its entirety.”

A number of Lords challenged the government on the Joint Comprehensive Plan of Action (JCPOA), otherwise known as the Iran Nuclear Deal.

Lord West asked, “One month ago the Iranians exercised a practice dummy rum attacking the Dimona nuclear facility in Israel using 16 ballistic missiles and lots of drones. A number of agencies are now assessing that Iran will have a nuclear weapon capability within months. Where have we got to in trying to restart the JCPOA discussions to try to stop what is rapidly rushing towards a situation where there will be a war in the Middle East?”

Clearly, Iran has not kept to its end of the bargain. Iran’s military has continued to develop and test ballistic missiles and strengthen its might using British taxpayer money from the deal in order to accomplish this.

Despite Iran breaking the rules, Lord Sharpe affirmed the governments trust in the disastrous deal. “We still believe that the JCPOA offers the best way forward,” he said.

Lord Austin fired a question challenging the JCPOA saying, “How is it possible that the JCPOA has achieved anything, when, since signing up to it in 2015, Iran has carried out several ballistic missile tests, built new fortified missile bunkers, lied about the development of nuclear weapons to target our ally Israel and waged a shadow war against shipping in the Gulf, in addition, as we have heard, to kidnapping and killing British citizens? Do we not need a much tougher and robust approach when dealing with Iran, with a much tougher regime of sanctions, including against the new president?”

Lord Sharpe replied, “My Lords, the JCPOA is not perfect, but it still represents the best and currently only framework for monitoring and constraining Iran’s nuclear programme. Our objective is to realise the benefits of the deal. A restored deal could pave the way for further discussions on regional and security concerns, including in support of a non-proliferation regime.”

It is good to see Lords pressing for the outlawing of the IRGC as a terrorist organisation. It is also right that the UK government is challenged over the disastrous Iran Nuclear Deal which has done nothing to stop Iran’s aims of acquiring nuclear weapons but instead has funded the regime so it can carry out its destabilising actions in the region.

Israel sees the Iranian regime’s actions as an existential threat. Iran has long claimed to seek Israel’s destruction and their actions back up those words. Iran has placed militant groups around Israel’s borders, including funding Hezbollah and Hamas which are outlawed in the UK. These terror groups are carrying out the direct orders of IRGC commanders.

The UK should outlaw the IRGC as a terrorist organisation and turn away from the disastrous Iran Nuclear Deal unless a stronger and more robust deal can be made that properly limits Iran’s nuclear and military ambitions.