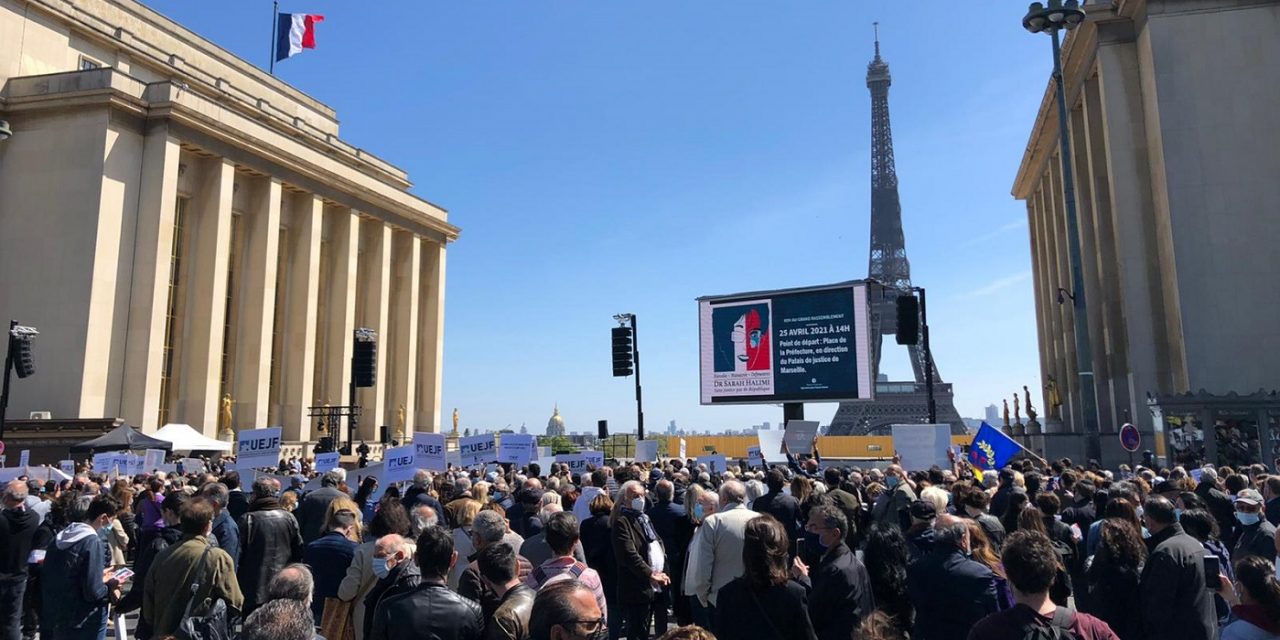 Thousands of protesters gathered in Paris and other French cities on Sunday to denounce a court’s refusal to try a man who killed a 65-year-old Jewish woman, after it was claimed the attacker was under the influence of cannabis.

The ruling prompted President Macron to call for a change in French law, meanwhile on Monday it was revealed the judge has now resigned.

Sarah Halimi was beaten for over thirty minutes and pushed out the window of her Paris flat by neighbour Kobili Traore, 27, who shouted “Allahu Akbar” (God is greatest). Traore confessed to the killing and has been in psychiatric care since the attack. Earlier this month, the country’s highest court said this month that while the murder was anti-Semitic, Traore could not be held criminally responsible because he had taken cannabis before he committed his crime.

He has been in psychiatric care since Halimi’s death.

“The clamour has risen and hope has returned. That hope is all of you here,” Halimi’s brother William Attal told a crowd of several thousand at the Trocadero esplanade in Paris.

Former French first lady Carla Bruni, wife of Nicolas Sarkozy, also appeared at the Paris rally, as did Mayor Anne Hidalgo, who said the city would soon name a street in Halimi’s memory.

“It will also be a way of doing her justice,” Hidalgo said.

Massive rally in Paris in memory of Sarah Halimi & to protest the high court's decision that her murderer was not criminally responsible for his crime. #JusticeForSarah
pic.twitter.com/OitCtOBRZp

Meanwhile in London, Dame Maureen Lipman was among more than 250 people gathered outside the French embassy in London.

Speaking at the rally in Knightsbridge, actress Dame Maureen said the court’s decision was a “betrayal” and sent a message to future attackers.

She said: “If you want to kill a Jew with impunity, then make sure you smoke a joint or have a bottle of scotch before you do it.”

Dame Maureen added: “His actions may have been compromised by the influence of cannabis, but he was compos mentis enough to shout ‘Allahu Akbar’ (God is Good) and deem Sarah a ‘Sheitan’ (Satan) as her flung her out of the window. As her neighbour, he had frequently terrorised her and called her daughter a ‘filthy Jew’.”

Diaspora Affairs Minister Omer Yankelevich (Blue and White) attended the Tel Aviv rally and warned of the danger of allowing Halimi’s killer to walk free under such circumstances.

“From Tel Aviv to Paris, the Jewish people in Israel and around the world stand united in solidarity with the Halimi family and the French Jewish community,” she said.

“Sarah Halimi was murdered only because she was a Jew… Especially today, with the alarming rise in radical Islamic antisemitism throughout France, this court ruling sets a dangerous precedent that jeopardizes the security and well-being of our brothers and sisters in France,” Yankelevich said, adding that Israel would do “all in its power to ensure the safety of all Jews” around the world.

🔴 Happening right now: hundreds of French Israelis are rallying at the French embassy in Tel Aviv to demand justice for Sarah Halimi, murdered in an antisemitic attack in Paris in 2017, whose killer was deemed “not criminally responsible” because he had been smoking marijuana. pic.twitter.com/4OBq88Stni

Last week, President Emmanuel Macron said France “does not judge citizens who are sick, we treat them… But deciding to take drugs and then ‘going crazy’ should not, in my opinion, take away your criminal responsibility.”

The president also attempted to assure the Jewish community by saying, “It’s not for me to comment on a court decision, but I would like to express to the family, to the relatives of the victim, and to all our Jewish citizens who were waiting for a trial, my warm support and the Republic’s determination to protect them.”

“I would like Justice Minister [Eric Dupond-Moretti] to present a change in the law as soon as possible,” Macron said.

Scenes from the rally for justice for Sarah Halimi in Paris this afternoon where thousands turned up to protest the French high court ruling absolving her murderer of criminal responsibility for the crime…#SarahHalimi pic.twitter.com/3jzM9QBtzc