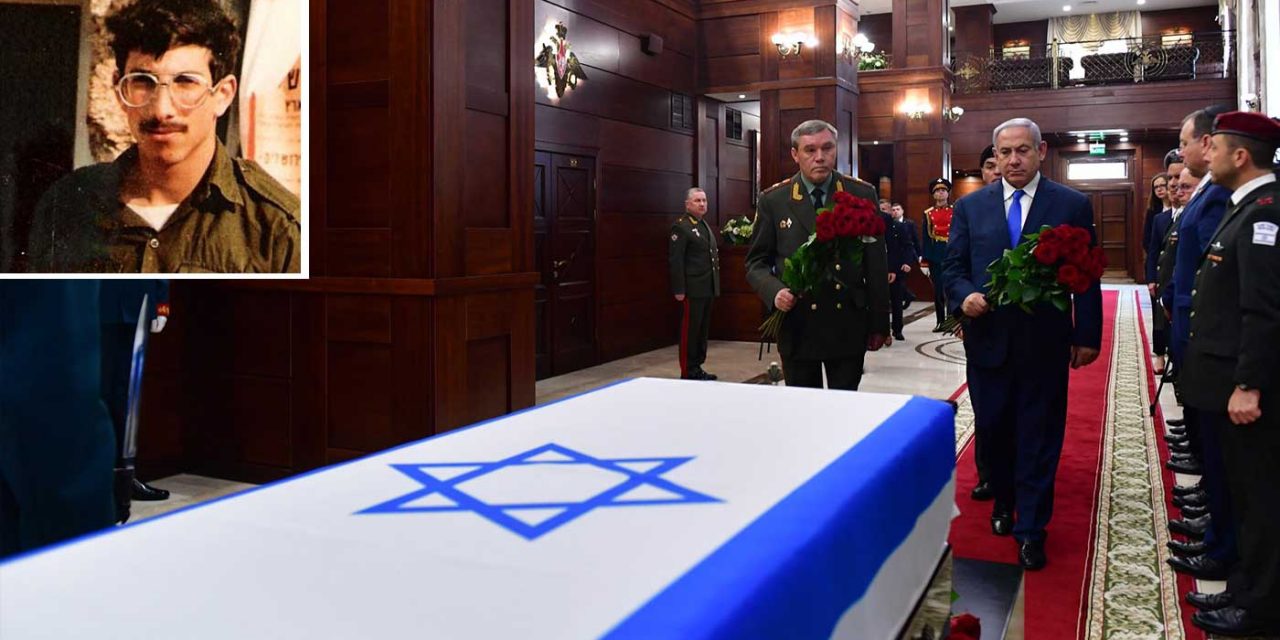 The body of Sgt. First Class Zachary Baumel was returned to Israel this week and laid to rest in Jerusalem’s Mount Herzl military cemetery on Thursday evening, nearly 37 years after his death in the First Lebanon War’s battle of Sultan Yacoub in 1982, at the age of 21.

Netanyahu said Baumel’s bones have been verified with certainty and thanked Russia for their involvement in discovering and returning the body to Israel.

Baumel was one of six soldiers who went missing in Lebanon on June 11, 1982, at the beginning of the First Lebanon War, fighting against Syrian forces.

Twenty Israel Defense Forces soldiers were killed in the battle. Two soldiers were taken captive and the body of a third missing soldier was returned in 1984 and 1985. The whereabouts of two others, Zvi Feldman and Yehuda Katz, are still unknown.

On Thursday, thousands of Israelis turned out for his funeral ceremony, where Baumel was eulogized by President Reuven Rivlin and Prime Minister Benjamin Netanyahu, among others.

“Zachary, after 37 years, a few days before the battle where you fell, you wrote to your parents, ‘Don’t worry, everything’s alright, but it looks like I won’t be home soon,’” Rivlin said in his eulogy. “Thirty-seven years have elapsed, but today you returned home. You returned to our homeland, to Jerusalem.”

“We did not give up and we will not give up on this sacred task until all those who fell defending our people and country are brought home. We will not cease until all our boys are back home, including your comrades in arms Sergeant First Class Yehuda Katz and Sergeant First Class Tzvi Feldman, and all those who fell in battle and whose resting place is unknown,” Rivlin said.

Netanyahu said that retrieving the bodies of Israel Defense Forces soldiers killed in battle touches the deepest part of Israeli and Jewish identity.

Like many Israelis, he said, “I got chills when I heard that Zachary was back home. We’ve been waiting for this for 37 years.”

“Bringing our sons back home touches the deepest part of our identity as Jews and Israelis,” Netanyahu said. “In the name of these values, and out of love for Israel, Zachary went to war.”

Osna Haberman, Baumel’s sister said: “All of our prayers during these 37 years went to one place and we’re here. I thought about what I would do here in this place. I can’t even embrace you. So I thought to turn to the ground and ask the land to embrace you. After a few minutes, I understood that I don’t even need to ask.”

“The land embraces you so strongly. And why? Because there is absolute love between the son that gave everything for the land and the land itself, and there is a perfect union here. You are together now,” Haberman said.

Speaking to Israeli Prime Minister Benjamin Netanyahu in Moscow on Wednesday, President Putin said Russian soldiers in Syria discovered the body of Staff Sergeant Zachary Baumel, which was returned to Israel on an El Al flight earlier this week. Baumel had been listed as missing in action since the first war in Lebanon in 1982.

Netanyahu said: “Two years ago I turned to you with a personal request – that you help us in finding the remains of the soldiers … out of the great shared values of comrades-in-arms and fellowship of soldiers. You responded immediately. You said that you would act personally. I would like to thank you, my friend, for myself and for the people of Israel, for what you have done, for the brave friendship between us, which is very important for our country and is very important for the relations between us. But I think that here it is on a higher level and has expressed a great common value that unites our two peoples.”

Netanyahu said that Baumel’s family were overwhelmed with emotion after they were informed his remains were found:  “I told them that Russian troops risked their lives to search for his remains and they were left speechless.”

Putin said: “Our soldiers together with Syrian partners established his resting place. We are very happy that they will be able to give him the necessary military honours at home.”

Two years ago I turned to you with a personal request – that you help us in finding the remains of the soldiers, including Zachary Baumel, out of the great shared values of comrades-in-arms and fellowship of soldiers. You responded immediately. You said you would act personally. pic.twitter.com/hEFZnjaZHo