Is John Kerry a threat to Israel and Trump? 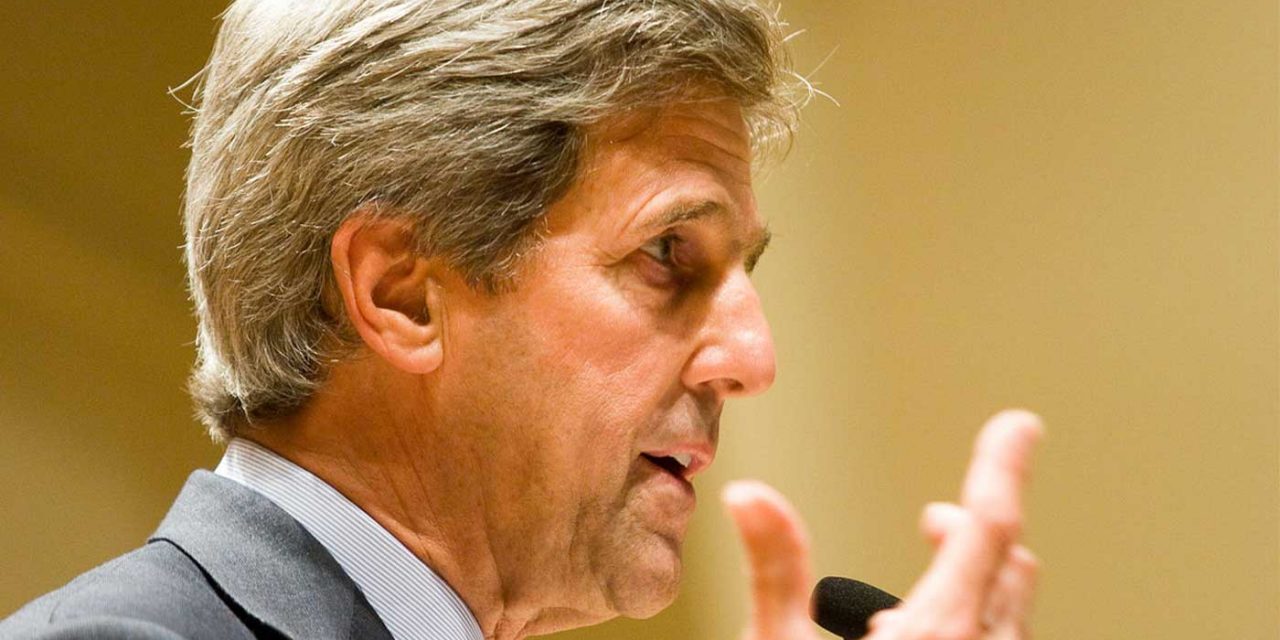 OPINION: Former US Secretary of State, John Kerry, has sparked controversy once again by taking the side of the Palestinians after a conversation between Kerry and an adviser to Mahmoud Abbas came to light last week.

The alleged comments surfaced after Kerry met with Abbas associate Hussein Agha in London. Israeli news outlet Maariv reported that during the meeting, Kerry told Agha to share a message with Abbas –urging him to “hold on and be strong” during talks with the Trump administration and “play for time…[and] not yield to President Trump’s demands.”

Kerry, who served as former President Barack Obama’s secretary of state during his second term, also reportedly referred to Trump using derogatory language, and said he would not be in office for long, suggesting he could be out in a year. Kerry also allegedly asked Abbas not to attack the U.S. or the Trump administration, but rather focus attacks on the president himself.

If these words are true then it clearly sends warning signals. This is the former Secretary of State allegedly giving information to another government on how to hurt his own president, as well as apparently speculating on the president’s downfall.

These allegations could be extremely damaging and so it is no wonder that both Kerry and Agha have denied that Kerry said these things when they met. However, based on past comments regarding Israel and more recent ones against Trump (such as his jokes about Trump’s weight) there could be some truth to this story.

Throughout his time as Secretary of State, Kerry was always at odds with the Israeli government.

Kerry was the person responsible for pushing through the disastrous Iran Nuclear Deal, which Israel was strongly against.

He spread the delusion that Iran had changed and that the only way to stop the regime from acquiring nuclear weapons was through dialogue and trade, not sanctions. He failed to negotiate a strong deal and effectively gave the Iranians everything they wanted. He also miss-sold the deal to the public, for example, he first said that the deal was only worth around $55 billion to Iran, but Iran ended up receiving more than double that amount. Kerry also claimed before the deal that Iran wouldn’t use the money for terrorism, but after the deal was signed, Kerry admitted that some money would reach the hands of terrorists. True to their word, Iran has continued its pursuit for nuclear weapons and has committed vast sums of their newly acquired money to arm terrorist groups such as Hezbollah in Lebanon and Hamas in the Gaza strip, both with the aim of destroying Israel.

Kerry was also influential in pushing through UNSC Resolution 2334. This passed when the US failed to use their veto in December 2016. The resolution deemed Israeli construction in Judea and Samaria, as well as East Jerusalem, were both “illegal” and the core problem in the Israel-Palestinian conflict. It failed to condemn Palestinian incitement and violence or their lack of recognition of an Israeli state.

Kerry praised the resolutions passing and in his remarks reiterated the blame levied at Israel, he also defended the Palestinians, prompting an uncharacteristically strong rebuttal from Theresa May.

The following month, January 2017, his last month in office, Kerry sought to advance a similar bill through the Paris Peace Conference. Fortunately, his plans were scuppered by the UK government, who, under pressure from the incoming Trump administration, vetoed the bill preventing the entire European Union from adopting it.

This ended Kerry’s plans. Without the support of the European Union, Kerry was then unable to push through an even more damaging resolution through the United Nations in the days following. This was a blow to Kerry and he reluctantly made a personal call to Israeli Prime Minister Benjamin Netanyahu to say that he would no longer be pursuing such a course of action.

While Kerry was unable to carry out his full plans against Israel, he still had huge influence on both the Iran Deal and UNSC Resolution 2334, both of which were extremely damaging to Israel.

Now that Kerry is out of office, it seems he has not quite finished with Israel. On a number of occasions he has spoken out against Israel and in support of the Palestinians.

In November 2017, a video of Kerry surfaced where he shocking claimed that, “The Palestinians have done an extraordinary job of remaining committed to non-violence” and that in the knife-intifada of 2015, the Palestinians “delivered non-violence in the West Bank”.

He then blamed Israel saying “the current Israeli government has publicly declared they are not ever for a Palestinian state,” which is false, and the claim that “if the equation doesn’t change, I’ll be amazed if within the next 10 years if we don’t see some young [Palestinian] leader come along who says we have tried non-violence for the last 30 years and look, it hasn’t gotten us anything.”

These comments show John Kerry’s anti-Israel bias and complete lack of understanding of the situation. In the past 30 years (and longer) the Palestinian leadership has spearheaded three intifadas against Israel, with Palestinian terrorists murdering thousands of Israeli civilians in shootings, bombings, stabbings, kidnappings and car rammings. Palestinian terrorists have targeted and murdered Israelis outside of Israel too, including in Europe. Let’s be clear, that is not 30 years of committing to non-violence.

And for the record, it was in fact Mahmoud Abbas who incited violence against the Israelis during the “Knife Intifada” of 2015.

On 13th September 2015, on the eve of Rosh Hashanah, there were Palestinian rioters on the Temple Mount, prompting Israeli forces to enter the complex, resulting in injury to several Palestinians. That same day an Israeli man was killed when Palestinian terrorists threw rocks at his car, causing him to crash and later die from his wounds.

Three days later, on 16 September 2015, Palestinian President Mahmoud Abbas declared his support for the Palestinian youths injured in clashes on the Temple Mount and stated, “Every drop of blood spilled in Jerusalem is pure, every shahid [martyr] will reach paradise, and every injured person will be rewarded by God.”

He also said that Israelis had “no right to desecrate [Al-Aqsa] with their filthy feet. We won’t allow them to do so and we will do whatever we can to defend Jerusalem.”

In the days following Abbas’s speech, a Palestinian woman walked towards an Israeli checkpoint armed with a knife and was shot dead as she attempted to stab Israeli soldiers. This was the first of many knife attacks carried out by Palestinians which from September 2015 to June 2016 resulted in 38 Israelis being killed, 558 being wounded as well as the deaths of 235 Palestinians, most of whom were killed carrying out attacks on Israeli.

Mahmoud Abbas’s incitement was a clear indicator of the knife intifada. Palestinian leaders also joined calls for violence with religious leaders in particular fueling the flames. On top of this, most of the attacks took place in the West Bank, completely dismissing Kerry’s false claims that they were committed to “non-violence” and that they “delivered non-violence in the West Bank”.

Let’s also not forget that Kerry was the one who coined the term “Partner for Peace” in reference to Palestinian President Mahmoud Abbas. A title that governments and the media keep repeating as if it is true, while Abbas proves them wrong time and time again.

So Kerry has a track record of taking the side of the Palestinians, has repeatedly ignored the crimes of their leadership and actively worked to damage Israel.

Is John Kerry a threat to Israel and President Trump? Well, the views he is alleged to have expressed are of concern.

Fortunately, however, it appears that the majority of Kerry’s damage (of which there was much) is already done. There is rumour that he could run for President in 2020. However, Kerry has denied this.

At the moment though it is the attitudes he expresses that are of most concern. These views are becoming common place in politics around the world and of course in the media. Therefore we must be vigilant about these things.

As Christians who love Israel, we must continue to pray for President Donald Trump and Prime Minister Netanyahu.