Hamas leader, officials: uncompromising resistance is only way to expel ‘the occupiers’ 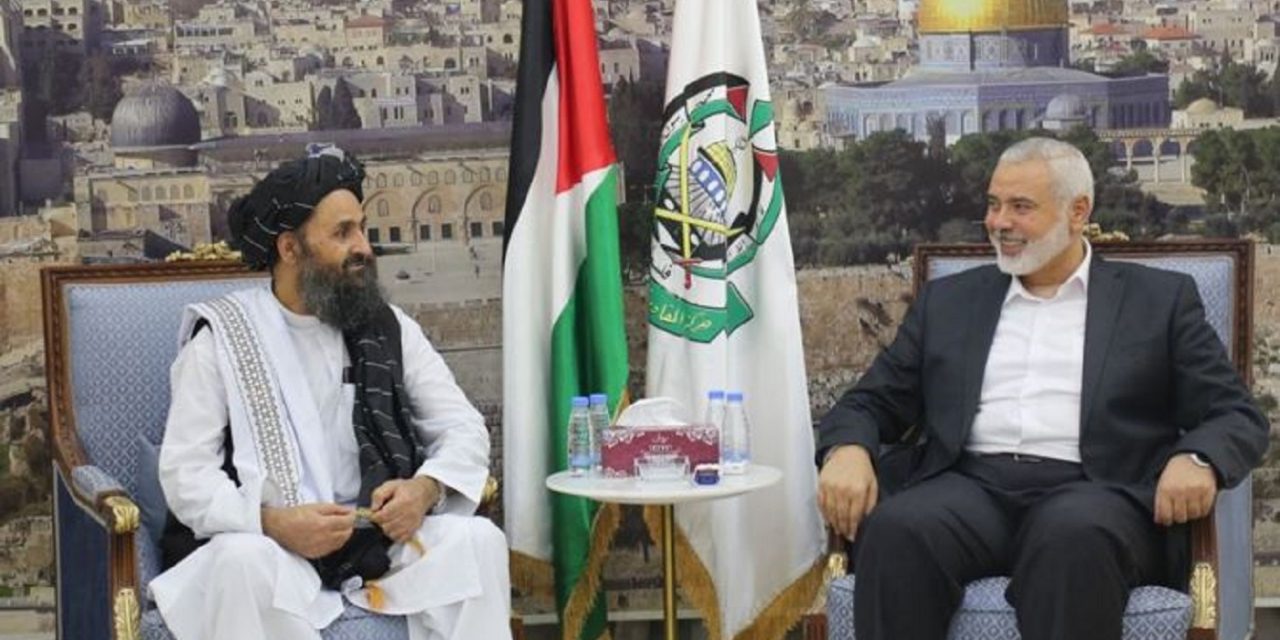 Hamas leader Ismail Haniyeh and other officials were among the first to congratulate the Taliban on “expelling the occupiers” by means of their “jihad” from Afghanistan.

According to a report by the Middle East Media Research Institute (MEMRI) published on Tuesday, Hamas quickly released pictures of a meeting between Haniyeh and Taliban officials in Doha, Qatar.

Since the Taliban’s swift takeover of Afghanistan, former Hamas officials and journalists affiliated with the movement published articles discussing the lessons learned from the debacle.

Yousuf Rizqa, a former Hamas information minister in Gaza and an advisor to Isma’il Haniya, wrote in his column in Hamas’s mouthpiece media outlet Filastin, “The lesson we can learn from the Taliban… is that resistance always defeats the occupier. An occupier, even one as big and strong as the U.S., will necessarily be defeated, and national resistance, wherever it takes place, will necessarily triumph.”

Fayez Abu Shamala, wrote about how Hezbollah, the Taliban and other groups proved how to win against ‘occupiers’ because they never gave up the “sword of resistance”.

“Hizbullah did not sign a truce or agree to any ceasefire with the Israeli enemy in South Lebanon, but continued the war for the liberation of the south until that unforgettable day in 2000 when Israeli prime minister Ehud Barak, defeated and expelled, announced a withdrawal from South [Lebanon]. Throughout the years of the conflict, the facts proved that the occupation could not attain a lull [in the fighting], or impose a truce or any kind of ceasefire. The sword of the resistance remained aloft, held over the necks of the South Lebanon Army, the servant [of Israel], and later over the necks of the officers of the Zionist army [itself].”

“[Likewise,] the Palestinian resistance organizations in Gaza did not sign any truce or ceasefire [agreement] throughout the years of the Al-Aqsa Intifada, which lasted from 2000 until 2005. The popular resistance, [armed with] simple [means], continued until the unforgettable day when Israeli prime minister Ariel Sharon, defeated and expelled, announced his withdrawal from Gaza. The Israeli government withdrew [from the Gaza Strip] and dismantled the settlements, because, throughout the years of the Al-Aqsa Intifada, it had failed to attain any lull or truce in the daily fighting, and the sword remained aloft, held first of all over the necks of the submissive [Palestinians] and those who doubted the efficacy of the intifada, and then over the necks of the occupiers and settlers.”

You can see from Hamas’ own admission that they will never sign a peace treaty with Israel but will continue to hold the sword aloft, as they put it.

This highlights the true brutality of Hamas. Terrorism is their only form of action. Hamas subjugates its own people through terrorism and then tries to defeat Israel through the same means.