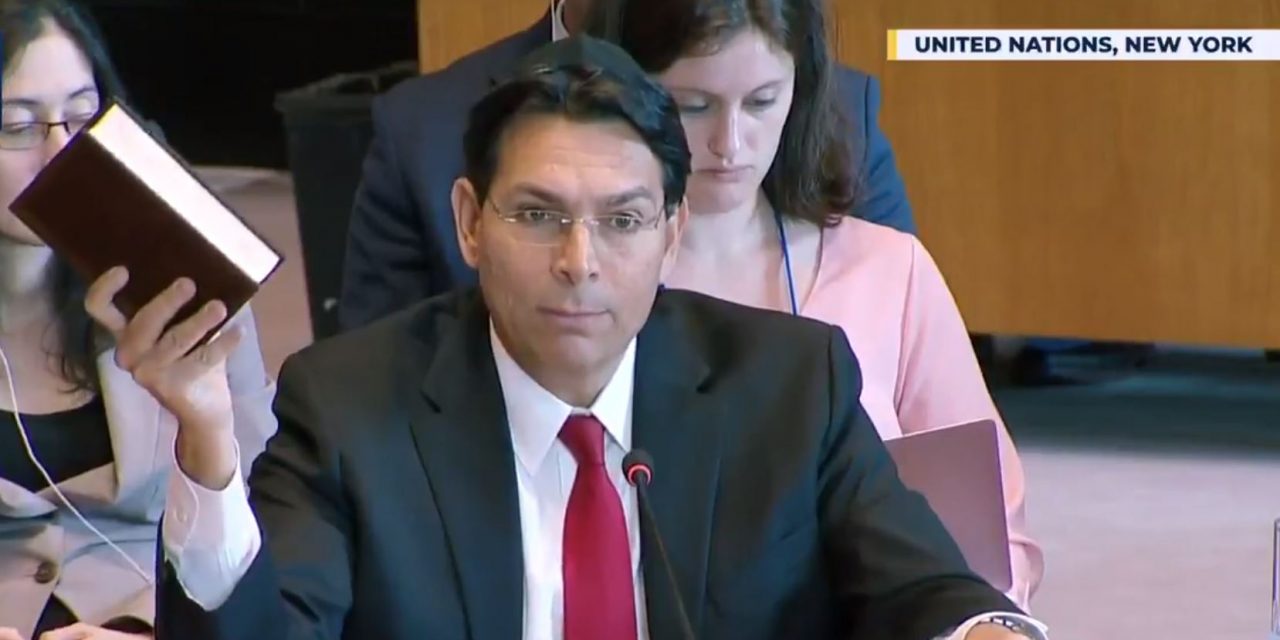 Israel’s UN ambassador Danny Danon used the Bible to defend the Jewish people’s claim to the land of Israel during a special session at the United Nations Security Council on Monday.

Danon was tasked with the job of proving the case for Jews’ connection to the Holy Land during the session. He outlined four reasons, “the Bible, history, international law, and the pursuit of international peace and security.”

Danon then raised up the Bible, turned to attendees and said, “This is the deed to our land.”

“From the book of Genesis to the Jews’ exodus, from Egypt to receiving the Torah on Mt. Sinai, and to the realization of God’s covenant in the holy land of Israel, the Bible paints a consistent picture. The entire history of our people and our connection to Eretz Israel begins right here,” he continued while lifting up the Bible once again.

'The #Koran itself accepts the divine deed of the #Jewish people to the land of #Israel,' says Israeli Ambassador @dannydanon in his address to the UN Security Council: pic.twitter.com/a5hbT5rWk0

Danon argued that all of the Abrahamic religions – Judaism, Christianity, and Islam – affirm the Jewish people’s connection to Israel.

“The Qur’an itself accepts the divine deed of the Jewish people to the land of Israel,” he said.

Danon then told the group how the Jews were expelled from Israel.

“In 70 CE, Roman Emperor Titus destroyed our Second Temple, expelled the Jewish people, and renamed the land nestled between Egypt and Lebanon ‘Syria-Palestina, as a southern province of Syria. THAT is where the name Palestine comes from, though Jews still lived in Jerusalem,” he argued.

He also placed blame for the ongoing  Israeli-Palestinian conflict at the feet of Palestinian leaders.

1/4 Today, I will present the four pillars that prove the case for Jewish ownership of the Land of #Israel: the Bible, history, legal claim, and the pursuit of international peace and security. #UNSC