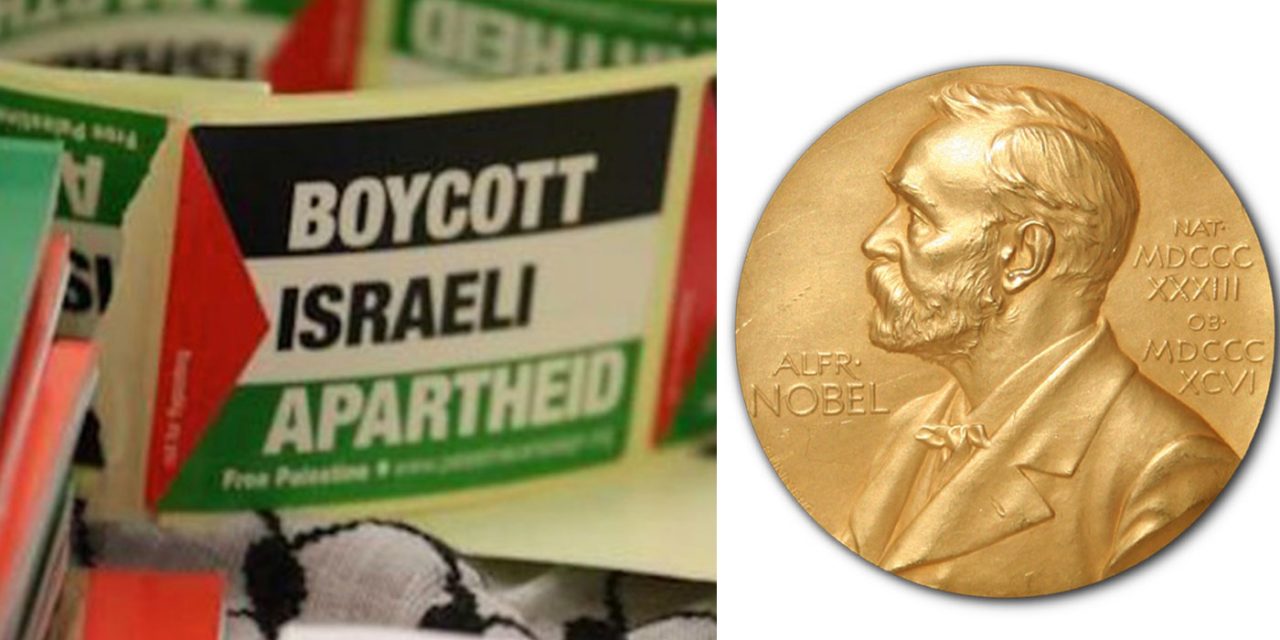 The anti-Israel, antisemitic and anti-peace movement that is the Boycott, Divestment and Sanctions (BDS) Movement has shockingly been nominated by Norwegian politicians for the Nobel Peace Prize.

Bjørnar Moxnes, a member of Norway’s Parliament, formally nominated the Boycott, Divestment and Sanctions (BDS) campaign, with support from a range of left-wing and liberal Norwegian political parties.

“As a member of the Norwegian parliament, I proudly use my authority as an elected official to nominate the Boycott, Divestment and Sanctions (BDS) movement for Palestinian rights for the Nobel Peace Prize,” Moxnes’s statement declared.

“Awarding a Nobel Peace Prize to the BDS movement would be a powerful sign demonstrating that the international community is committed to supporting a just peace in the Middle East and using peaceful means to end military rule and broader violations of international law.”

Nobel Peace Prizes can only be nominated by people in official positions in Norway. As Moxnes is a politician, he is eligible to nominate someone.

It is important to note that this nomination does not guarantee that the BDS Movement will be shortlisted. Each year there are many more nominations than are selected for vote, so we will see where this appears on the list when they announce the nominees in the coming months.

In response to the nomination, the Friends of Simon Wiesenthal Center for Holocaust Studies (FSWC) in Canada sent a letter to Norway’s Ambassador to Canada in which it expressed concerns.

“Over the weekend it was disturbing to see reports that Norwegian MP Bjornar Moxnes nominated the Boycott, Divestment and Sanctions (BDS) movement against Israel for a Nobel Peace Prize. It is important to understand that this movement, at its core, is anti-Semitic and is indeed an impediment to peace,” wrote FSWC President and CEO Avi Benlolo to the ambassador, Anne Kari Hansen Ovind.

“Boycott campaigns singling out Israel are inherently anti-Semitic and discriminatory by focusing only on goods produced by Jewish-owned companies while negatively impacting the empowerment of local residents, including Palestinians, regardless of their ethnic or religious backgrounds,” Benlolo pointed out. “According to the International Holocaust Remembrance Alliance, of which both Norway and Canada are members, this double standard applied to Israel is a form of anti-Semitism.”

“As the Canadian Government condemned the BDS movement through a parliamentary motion in 2016, it is important that Norwegian officials strongly condemn Mr. Moxnes’ actions, and recognize that the BDS movement for what it is, a hateful and anti-Semitic movement used as a tool to attempt to delegitimize the Jewish State of Israel,” he concluded.