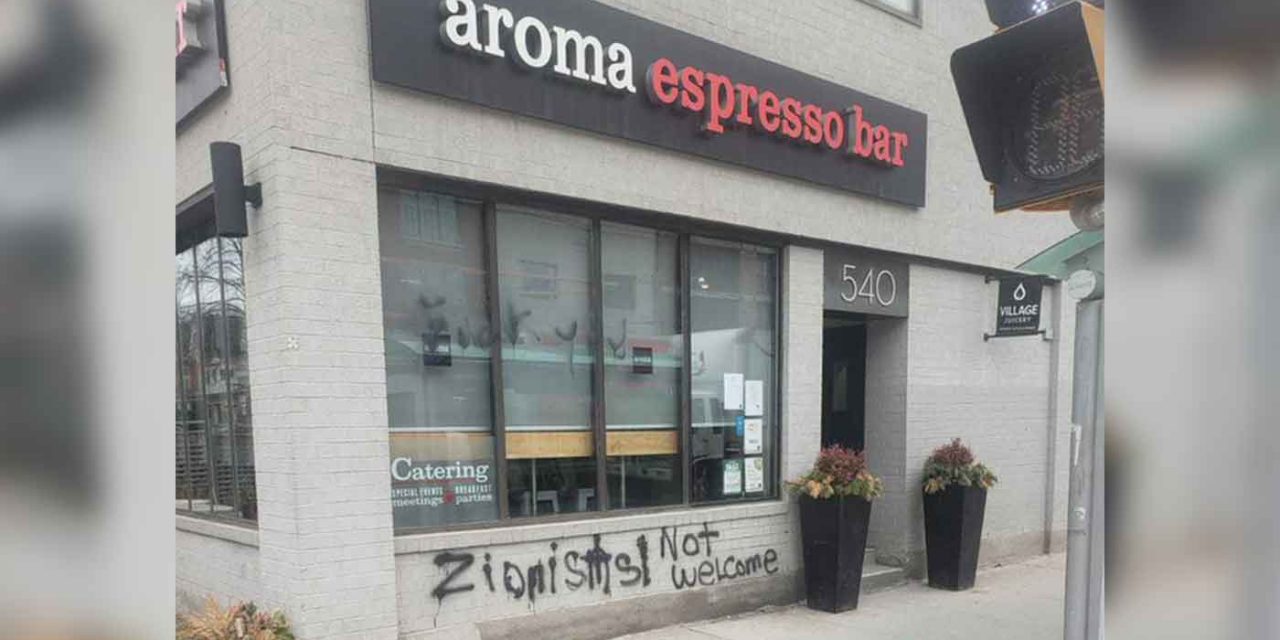 Anti-Semitic graffiti has been daubed on an Israeli-owned coffee shop in Toronto, stating “Zionists not welcome”.

The graffiti was found on an Aroma Espresso Bar in downtown Toronto on March 27.

B’nai Brith Canada posted a photo of the graffiti on Twitter after being alerted about it, writing: “This despicable hateful graffiti defacing an Aroma in #Toronto will not be accepted. @TorontoPolice have been notified. #Antisemitism.”

This despicable hateful graffiti defacing an Aroma in #Toronto will not be accepted. @TorontoPolice have been notified. #Antisemitism pic.twitter.com/5RTaEJ7frl

“We are aware of an act of antisemitic graffiti targeting an Aroma Espresso Bar downtown. UJA Community Security has been in communication with our partners at Toronto Police Service as well as Aroma Canada. Police have been phenomenally responsive and are investigating this act of hate.

We stand in solidarity with this wonderful community business. There must be no place for hate in our city. We urge anyone who may have information on this crime to contact Toronto Police Service immediately. #jewishtoronto”

According to the Jewish Journal: Aroma is an Israeli chain that has more than 100 locations worldwide. There have been several efforts to boycott Aroma due to its Israeli origins. For instance, in June 2018, there were flyers in downtown Toronto calling people to “boycott Aroma,” arguing that “every cup of coffee you buy at Aroma helps strengthen this illegal occupation and Israel’s campaign of violence against the Palestinians.”