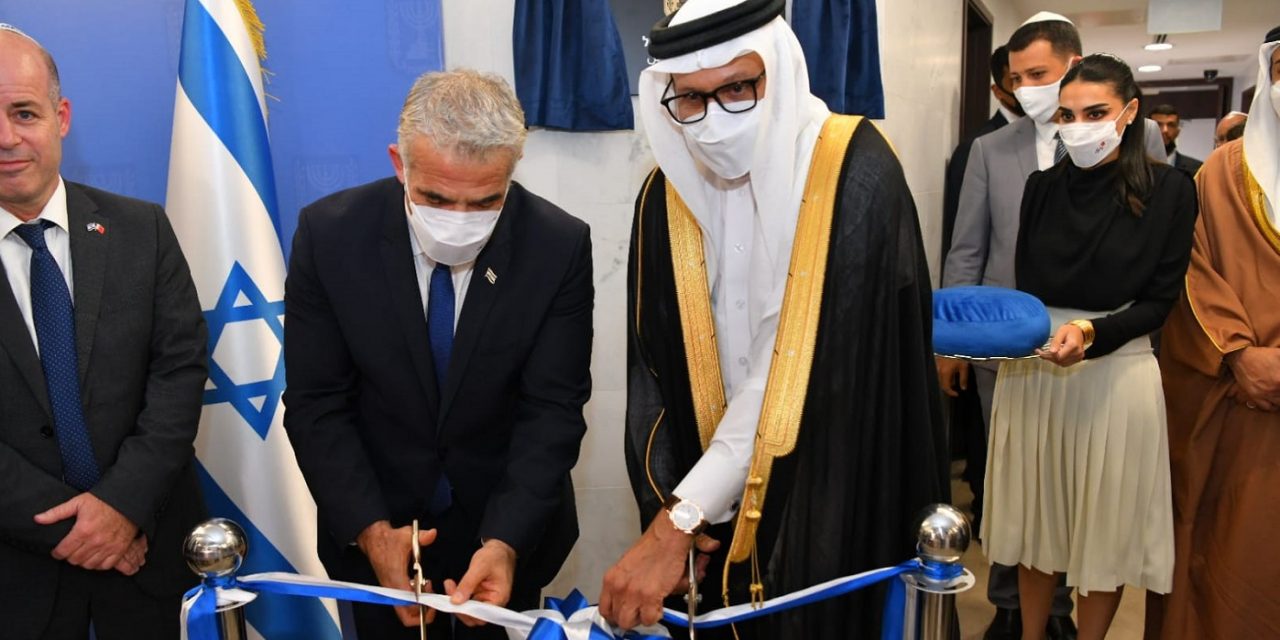 Israeli Foreign Minister Yair Lapid traveled to the Kingdom of Bahrain on Thursday in the the first official visit by an Israeli minister to the country.

In the landmark visit, Lapid met with Bahrain’s Foreign Minister Abdullatif bin Rashid Al-Zayani after arriving in the capital Manama.

Together, the two inaugurated the Israeli embassy in Manama and signed a list of bilateral agreements including on on water, environment and sports.

The visit comes a year after the signing of the Abraham Accords with the United Arab Emirates and Bahrain, followed by Morocco and Sudan.

“Thank you for the opportunity to be here today, and to take this step together in building our relations,” said Lapid, “in a model of coexistence and cooperation between cultures and between faiths.”

Thank you to the King of Bahrain, His Majesty King Hamad Bin Isa Al Khalifa, on a historic, warm, and hopeful meeting.

His Majesty’s leadership and inspiration have led to true cooperation and our meeting outlined the path forward for our relationship. pic.twitter.com/Ip6Ewu4Gsn

“May our people live in peace and prosperity forever,” Lapid said during the inauguration. He added in Hebrew: “Israel made a major, historic step today in the Gulf.”

“It is an unmistakable signal to all that we are determined,” Bahrain’s Foreign Minister Abdullatif al Zayani said. “We are not done.”

FM @yairlapid: “Today we cut the ribbon and inaugurated Israel’s embassy in Bahrain together with Bahrain’s FM.

The opening of @IsraelinBahrain symbolizes the cooperation between our countries. We agreed that Bahrain will open its embassy in Israel by the end of this year pic.twitter.com/ddQ2rAiOT0

The deals focused on areas of collaboration between the two nations in future healthcare, sports, and environmental initiatives.

“His Majesty’s leadership and inspiration have led to true cooperation and our meeting outlined the path forward for our relationship,” Lapid announced, praising the visit on Twitter.

“Our opportunities are shared. Our threats are also shared, and they aren’t far from here,” Israel’s foreign minister cautioned to the media.

Many experts believe Lapid was referring to Iran, whose delay in returning to nuclear negotiations elicited concern from world powers.

Words cannot express the amount of hope and promise that today’s visit has shown.

Listening to our leadership discuss the vision they have for our two peoples and the region, and how that vision went hand in hand with that of HE @yairlapid’s was inspiring. pic.twitter.com/zUGiIdoWay

FM @yairlapid held a diplomatic dialogue with his counterpart, the Foreign Minister of Bahrain

“We talked about the cooperation between our countries and about taking the official peace between us and turning it into an active, economic, security, political and civic friendship” pic.twitter.com/7uxg9KF8Ck

Crew members of Gulf Air flight GF972 waved the flags of Bahrain and Israel from the cockpit windows of the passenger jet when it landed.

As FM @yairlapid touches down in Bahrain, this @GulfAir plane is en route to Israel, where Deputy FM @idanroll will inaugurate the carrier’s new route of direct flights 🇮🇱🇧🇭. Diplomacy in action 🌍 pic.twitter.com/7YdJNIVYMc