UK votes against Israel at the UN: ACT NOW: Contact Theresa May

On Friday 23 December the United Nations Security Council passed a biased resolution against Israel, which was shockingly supported by the UK.

On 16 November MPs will debate the Centenary of the Balfour Declaration, which paved the way to establishing the modern State of Israel. We have a very short window of opportunity to encourage MPs to attend this debate and support Israel.

It takes only a few minutes to contact your MP using the pre-filled form in partnership with Israel Britain Alliance. Click on the link below and enter your Postcode to lookup your MP and send the letter. Please act now to make your voice heard before 16 November.

For more information about the Balfour Declaration, go to www.cufi.org.uk/IAmBalfour

Contact Government to warn against the escalation of terror against Israel.

On 13th October 2016, UNESCO members passed a resolution that focused on some of the Holy Sites of Jerusalem.

As a result, UNESCO will only refer to the Temple Mount complex by Islamic names (Al-Aqsa Mosque and Haram al-Sharif) and no longer use other names in Hebrew and English (Har HaBayit or Temple Mount).

The resolution effectively divorces the history of the Jewish people from their most holy sites. The Temple Mount has been a holy place to the Jewish people for more than 3,000 years and to deny this fact is an insult to both Jews and Christians.

Whenever ISIS (Daesh) destroys an historic site in an attempt to eradicate its history, the world rightfully condemns. Why therefore has UNESCO, a body created to protect cultural heritage, allowed an action to take place that denies the heritage of Judaism and Christianity?

The vote goes against UNESCO’s mission statement of “bringing peace to the minds of men and women”.

Instead of documenting history, this vote attempts to erase the facts of history.

Instead of promoting cultural and religious understanding, this vote divides cultures and restricts religious freedoms.
Instead of bringing about peace in the region, this vote does nothing towards furthering peace and only brings greater division.
Historical fact cannot be erased by a vote. And no religion’s history should be denied because of political or religious motivations.
We, the undersigned, demand that you reinstate the Hebrew and English names for the Temple Mount and Western Wall and recognise once again the significant history of Judaism and Christianity to their most holy sites.

The Judeo-Christian roots of the Temple Mount will NOT be erased by a vote at UNESCO.

On 13 June MPs will debate the Foreign Aid programme. In a previous Action Alert, CUFI supporters brought to the MPs attention the abuses that are taking place regarding the Palestinian Authority (PA) paying criminals salaries and using aid funds to incite and support violence. We would like to thank all those who contacted their MP.

Whatever views people hold about the aid budget, paying salaries to terrorists and supporting incitement does not help people in poverty.

The email letter respectfully requests that your MP attends the 13 June debate; it asks them to make a contribution based on the evidence that has been uncovered; it makes sensible suggestions on how these problems can be resolved and it further requests that MPs ask DFID to support peaceful coexistence programmes between the Israelis and the Palestinians.

With your help, we can make a difference.

How YOU can help ban Hezbollah

We believe that one of the ways to combat terror is to call terrorism exactly what it is. This is why our most recent campaign places pressure on the Government to proscribe one of the most notorious political and military groups in the Middle East as a terrorist organisation. 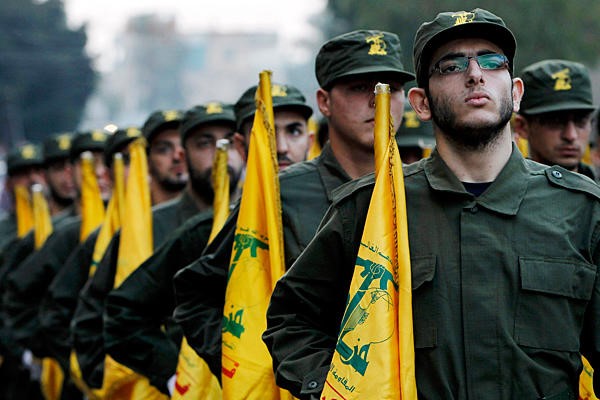 Hezbollah operates terrorist cells in Europe, Africa, Asia, and Latin America and it has a long record of attacking Israeli and Jewish targets around the world. It is a Shia Islamist militant group and political party also known as the “Party of God”; it doesn’t recognise the State of Israel and aims to establish an Islamic government across the Arab world that will “liberate” Jerusalem.

Israeli intelligence estimates in November 2015 reported a 50% increase in the terror organization’s missile stockpiles since May. Hezbollah had amassed a stockpile of 150,000 rockets as of November 2015, including missiles capable of striking every major Israeli city.

The British Government played a leading role in ensuring that the EU took the decision to proscribe the military wing of Hezbollah in July 2013. However, it is widely recognised that Hezbollah’s military and political wings are one and the same thing, controlled by a single command structure.

Hezbollah’s Jihad council, its political council, its executive council and its judicial council all report to its Shura council. The United States and the Netherlands have already banned both the military and political wings of Hezbollah. In March 2016, the Gulf Cooperation Council and the Arab League, and this month the Arab Parliament, also proscribed all of Hezbollah’s operations. 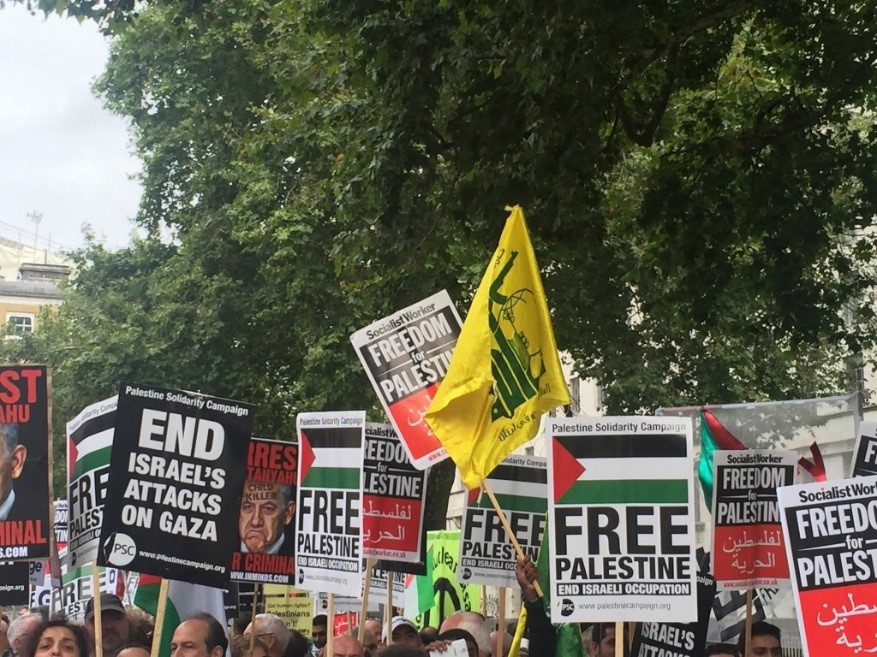 A Hezbollah flag at an anti-Israel rally in Whitehall, London

And here in the UK, Met police last year deemed that flying a Hezbollah flag was against the law, following the arrest of flag-bearing pro-Palestinian protesters in central London.

If Hezbollah cannot sign up to exclusively democratic and peaceful means of resolving political issues, the UK Government must also proscribe Hezbollah in its entirety.

We have made it possible, in partnership with Israel Britain Alliance, for CUFI supporters to contact the Government on this important issue. This is just one way we can speak out in support of Israel and against terror in the Middle East.

CUFI UK is partnering with Israel Britain Alliance and Zionist Federation to put pressure on MPs to debate this important subject in Parliament. An Early Day Motion has been submitted by John Howell, MP for Henley. Now this is YOUR opportunity to take action in support of Israel.

British taxpayers money is being used by the Palestinian Authority (PA) to pay convicted murderers in Israeli jails a monthly salary. The salary payments are higher than average salaries and increase significantly for longer jail sentences thereby rewarding murder and encouraging greater acts of terror.

The money comes from a World Bank budget which receives funding from Britain’s Department for International Development.This means British taxpayers money is supporting crime and conflict instead of helping to eradicate poverty.
If you disagree with this policy click on the link below (opens new window), enter your Post Code and submit an e-mail asking your Member of Parliament to sign an Early Day Motion calling on the Government to stop these payments.
The Early Day Motion (reference number 1151) was submitted by John Howell, Member of Parliament for Henley, on Thursday 26 February. Please ask your MP to support it.

In the Press
Is UK funding Palestinian incitement? MP’s challenge to David Cameron

That this House notes with concern that the Government continues to sanction payments from British taxpayers to convicted Palestinian  criminals serving their sentences in Israeli prisons, notes that the Department for International Development made payments to the World Bank’s Palestinian Development Plan (PRDP) Trust Fund, that this fund contributed to the Palestinian Authority’s Ministry of Prisoners Affairs which provided salaries to prisoners, that the payments continue through a cash transfer from the Palestinian Authority’s  PRDP fund to the PLO, acknowledges the efforts of Zionist Federation UK’s ‘No Money for Murder’ campaign that highlights evidence gathered by the International Development Select Committee (IDC) in 2014, which confirms that payments are made on a scale of 1400 NIS (£250)/month (for time served up to 3 years) to over 12,000 NIS (£2100)/month (for time served up to 30 years), further notes that the highest salaries are comparable to starting wages for teachers and nurses in this country, and calls on the Government to stop these payments from the International Development budget that both encourage and allow people to profit from murder.